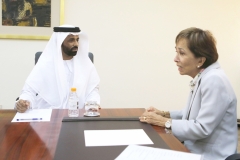 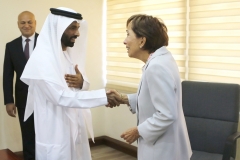 AMMAN, HRH Princess Basma Bint Talal Bin Abdullah, chairman of the Trustees of the Jordan Hashemite Development Fund, praised the role of the UAE in humanitarian work. She added that the UAE’s have a standing international in the field of humanitarian aid and development

She said: Humanitarian and charitable work has been a constant approach in the UAE since it was founded by the late Sheikh Zayed bin Sultan Al Nahyan,so become a word “GOOD” always saying with his name as it is associated with the name of the State. Development is a priority for the UAE and it is a fact an integral part of the functions and even the foreign policy of the State.

This came during a meeting with Sheikh Dr. Mohammed bin Muslim bin Hamri Al Ameri, IIMSAM Deputy Secretary-General
The meeting discussed ways of cooperation between the Fund and the IIMSAM organization through implementing a number of programs in various fields, The economic development of families and the promotion of economic participation of women and people with disabilities.

She also expressed her hope to strengthen cooperation with IIMSAM to serve the common objectives of the two sides and continue contribution to serving the target groups and the improvement of their standard of living. She also praised the role of the organization and Sheikh Bin Ham in activating its role in the Arab region starting from Jordan.

For his part, Sheikh Bin Ham stressed the importance of cooperation between ISMSAM and the Jordanian Hashemite Fund for Human Development and the strong relations between them, in a way that serves the objectives of the organization and the mission of the Fund aimed at reducing the scourge of poverty and hunger within sustainable development projects.

he said: The UAE, under the guidance of His Highness Sheikh Khalifa bin Zayed Al Nahyan, President of the UAE, continues to follow the path of the founding leader Sheikh Zayed, may God bless him and grant him peace, in a way that enhances the humanitarian values in the people of the UAE through launching a charitable initiatives and events directed to States and peoples.

He added that the UAE will remain a leader, participant and supporter of international humanitarian action, and UAE nationals will remain good ambassadors in all corners of the world.

During the meeting, Dr. Ben Ham briefed the participants on the objectives of the Fund in developing institutional performance and contributing to improving the living conditions of the chaste families and the various segments of the society, raising awareness and enhancing community participation in the development process.{:}