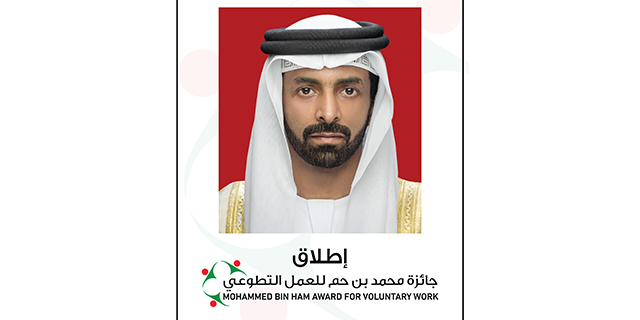 The Mohammed Bin Ham Award for Volunteering was launched under the name of Sheikh Dr. Mohammed Bin Musallam Bin Ham Al-Amiri the head of the Awnak Yawtun volunteer team, Volunteering is one of the most prominent aspects of the solidarity and social cohesion enjoyed by UAE nationals It also reflects their adherence to the principles and values associated with national identity and It is part of the state’s cultural and social fabric Volunteerism is a common work in the UAE society before the establishment of the state and its gained considerable official attention at the leadership level and at various levels of government and civil society after the establishment of the State For his part, Dr. Bakheet bin Salim Al Ameri, Secretary General of the Mohammed Bin Ham Award for Voluntary Work, said: The establishment of the Mohammed Bin Ham Award for Volunteer Work was a support for the great humanitarian efforts of the UAE locally and internationally When mentioning volunteerism and charity comes a mention the founding father the late Sheikh Zayed bin Sultan Al Nahyan the pioneer of humanitarian work in the world. The late Sheikh Zayed bin Sultan Al Nahyan prioritised local and international humanitarian and charity issues and the leadership of UAE followed his approach to provide everything possible helping those in need around the world Conditions for participation in the award: 1. The scope of volunteer work should be in the UAE 2. The participant must be a resident of the United Arab Emirates 3. The voluntary work must be licensed by the competent authorities in the UAE 4. Certificates and documents must be certified and stamped by the issuing bodies 5. Participation in voluntary work should be free of charge and has an impact on society 6. Send the details of volunteering to the email of the award for information mbhva@mohamedbinham.com The winners will be announced in April to mark the anniversary of the establishment of the Aounak Yawtun Volunteer Team. The target group is volunteers of both sexes, community members, associations, organizations, companies and voluntary programs